Theft and misuse of identity data

Title “Everyone can be affected”
When unauthorized third parties accept a person’s identity in order to disguise criminal activity, obtain fraudulent or financial benefits, sell the data of the person to interested parties, or discredit the rightful owner of the identity data, this is called identity theft.
Where are the dangers lurking?
What should I do?

Identity theft: How to protect yourself correctly (VISIT)

The more recent story of a popular newspaper’s website Iltalehti.fi recounts an identity theft case from Finland. In 2012 thieves broke into a person’s car, and stole purse with the documents. The person was advised to apply to self-block of credit applications in a bank, however, the block was active only for two years. Soon after that she noticed that there were loans granted on her name, the largest was 10.000 Euro.

Further, someone have used her identity to sign into a maternity hospital, and eventually child protection officers came to visit the person in question and enquired about her child (which she did not have). So, someone used her documents to give a birth. As a result three fraudsters were sentenced. The first one, 29 year-old woman, received a two-year and one-month prison sentence. In addition, the 21-year-old woman was sentenced to ten months in prison. The third accused, 33-year-old woman was sentenced to pay 50 day fines for forgery and three assistance fraud. In total they need to pay victim EUR 21 000 for moral damage, defamation and legal and other expenses.

Cyber Academy GmbH, Berlin
At the Visit conference in Munich, organized by the Result Group, participants agreed that there had to be increased cooperation at all levels to combat identity theft. Last but not least, the legislature is required to provide more for the investigative authorities
To create opportunities. 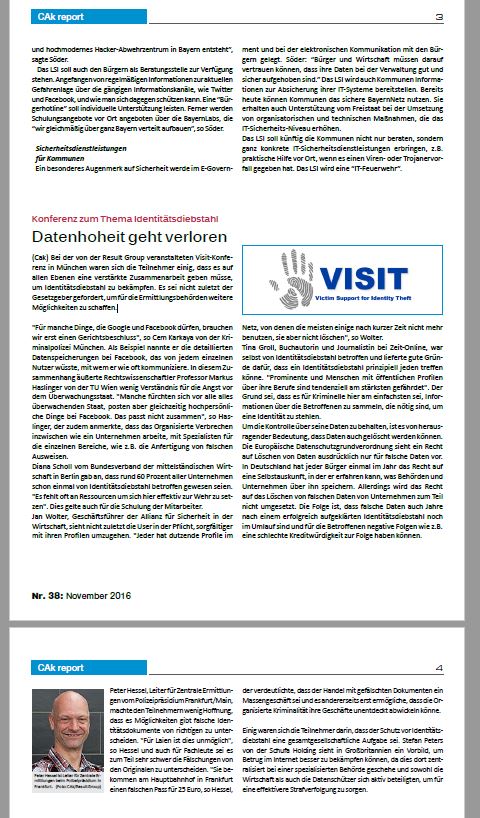 Read the full report (only available in German)
Cyber Academy Report No. 36 Conference Identity Theft . Please refer to the Newsletter Archive of the Cyber Academy No. 36, report on page 3-4

Report in the Bavarian TV-station: Conference against Identity Theft

Twelve experts from Germany, Austria, Finland and Portugal presented informative and exciting speeches on the wide spectrum of Identity Theft at the VISIT conference. About 100 attendees were given insights into the topics of risk, threat and abuse, victim reports and perpetrators’ profiles, possibilities for prevention and future prospects.

At the VISIT conference the Bayerische Fernsehen interviewed two conference speakers, journalist Ms Tina Groll and Stephan Peters from the SCHUFA AG. The interviews were broadcasted on national television in the “Abendrundschau”.

Against the digital carelessness

On November 3, 2016, the European Cooperation Project Visit (short for: Victim Support for Identity Theft) invited to a conference against identity theft. The international speakers on identity protection allowed the 100 participants in Munich to take a look beyond their own nose.

BR News reports on the International Conference Against Identity Theft

The journalist Tina Groll has been the victim of identity theft – the scammers needed only their name and date of birth. Already every fifth in Germany should have experienced a data abuse. Affected and experts plead for more legal protection and education at the Munich International Conference against Identity Theft.

Read the entire article online (only available in German)

On June 9, the 10th joint safety conference of the BfV and ASW Bundesverband took place in Berlin. The anniversary event with around 160 participants took place under the motto “New threats to information security and information sovereignty”.

Finland ahead of European partners

Following a 2014 proposal on ID theft by the Finnish government, ID theft became law in Finland on the 4th September 2015. The aim of the ID theft law, HE 232/2014, is to meet the requirements arising from attacks against information systems (IS). HE 232/2014 addresses ID theft and a wide range of cybercriminal activities, including: The directive includes violation of the secrecy of communication (§3), aggravated communications secrecy violation (§4), interference with telecommunications (§5), aggravated interference with data traffic (§6), light interference with data traffic (§7), interference with information systems (§7a), aggravated interference with information systems (§7b), hacking (§8), and aggravated theft of information (§8a). ID theft is addressed in §9b of the Act and is defined as the unauthorized use of someone else’s personal or identification data or other similar data identifying the person by a third party causing financial harm or more than minor inconvenience to the person. In addition, it is also unlawful to use messages which can be associated with a subscriber or a user of service. For example, data collected in communication networks to transmit, distribute, or provide messages (e.g. IP addresses). An ID theft case is opened only following a complaint, for example, that another party is acting unlawfully in using a stolen, created, or administrated identity to mislead another party.